Where: Dun Laoghaire East Pier top level near the bandstand.
Time: From 8:45 onwards 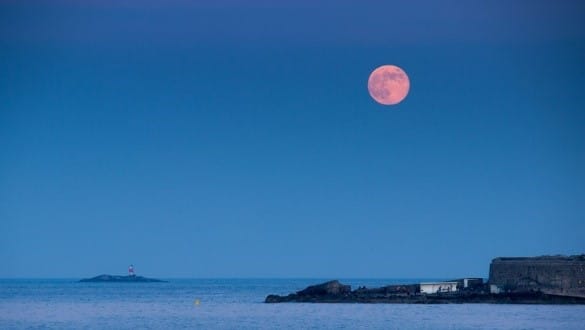 Weather permitting, we will endeavour to shoot a full moon rising over Sandycove from the East Pier in Dun Laoghaire during the ‘blue hour’. I’ll be there from 8:45 but, please note that while the moon will officially rise at 20:52, it will be a while after that before it is visible and later again before the sun actually sets. So if you don’t want to be out for too long I’d suggest not coming along until at least 21:15. I estimate the best shooting time will be around 22:00.

Ideally, you should bring a reasonably long lens (I use a 55 – 250), a tripod and a remote shutter release. In general, we will be wanting a combination of a reasonably large moon with sufficient foreground detail to make the shot interesting.

Too early and the sky is still too bright, too late and the moon is too bright relative to everything else (though with filters and/or bracketing the right shot can still be achieved), whereas during the blue hour the brightness of the moon is similar to everything else so can be captured nicely without things getting too technical.
This outing is obviously very weather dependent. If we have clear sky (or potentially clear sky) we will proceed as planned. If cloudy but nice, Plan B will be to try for some harbour shots (maybe some long exposures) in the setting sun / blue hour where once again around 22:00 or so should be the best time. If it turns out to be a wet evening, we will cancel (with the following evening being a potential alternative).

In the event of cancelling, I will endeavour to get a general email issued to all club members. However, if you advise me of your attendance and share your mobile phone and/or email contact details with me, I will keep you posted and issue a message in the event of cancellation.

Make sure to lock it and leave nothing valuable on display in your car.

It’s easy to become distracted when taking photographs. Use common sense, take responsibility for your own safety and then go shoot and have fun.